EXCLUSIVE Interview with NASA Astronaut Guion Bluford in Romania: The Outmost Quality of Spacemen is Adaptability

Almost like quoting Charles Darwin when he said that “It is not the strongest of the species that survives, nor the most intelligent that survives - it is the one that is the most adaptable to change”, NASA Astronaut Guion Bluford also says that spacemen`s outmost quality isadaptability – the capacity to adapt to the challenging training conditions and to be able to work with any type of people and personalities.


Forum Invest invited for the first time in Romania the NASA astronaut Guion Bluford, in the opening of BUCHAREST INTERNATIONAL FORUM (4-31 July 2011), in a breakthrough Conference at the Radisson BLU Hotel in Bucharest, on the 5th of July.


His experience as US Army pilot and NASA astronaut, how his life changed in August 1979, when he was selected, between over 10.000 candidates, to become an astronaut for NASA, the future of mankind in space and the current space programs – these he delivered to a mesmerized audience in Bucharest.

What you will read below are excerpts of an exclusive interview with Guion Bluford for Forum Invest.


Your colleague astronaut George Mitchell stated recently that the extraterestrial life exists. When you first went into Space, did you think you might see some kind of extraterestrial form of life?


GB- No, no… Space is a place to fly and I am a flyer, so when you’re in space you try to fly higher and faster.

Q – But did you receive specific training before went into the Space, just in case you might encounter a different form of life?

Q – How important it was the Space Program launched by the president Reagan, in the ‘80s, the so-called Star Wars, for the scientific research and to the competition with Soviet Union?

GB – I am pretty sure at that time it was very important and we see reminiscens today, the space shield that is built in Europe and part of it in Romania.

Q – Can you tell us about your research activity in Space?

The Missile Shield over Europe
Q – Talking about the Anti-Missile Shield which is built over Europe, with elements in Romania, at Deveselu Airbase, could a shield similar to this one be built in the space, to protect the Earth from asteroids?

GB – I don’t believe so, I don’t think it has the capability. It is primarily for missile defence here, on Earth.
Q – How important do you think it is for Romania to be partner with USA in building this shield?

GB – I will assume it is really important.

GB – It changed in the way of giving me a better awareness on the world around me, I think I become more an ecologist person recognising the importance of protecting the planet here, on Earth, and I got a lot of publicity from the people who wanted to ask me questions.

Q – When you are watching a movie, a Hollywood movie, Independence Day, or Armaggedon, what do you say, how much is reality and how muchi s fiction?

GB – In most of the movies is fiction. I do like to watch Star Trek movies, because highlights technology that we will eventually see in the future. So, I can see some of these movies and say – Oh, that’s the technology that years from now we will see.

GB – Not so much teleportation, but the iPad, I think you could see that in the Star Trek series. When I look at those movies I look at the potential technology that mani s developing.


Q – In the future, is it possible for man to live in the Space? I base my question on Star Trek series.

GB – We could do that, but you’ll have to have a spinning space ship and it will have to be a large vehicle. Right now, the thinking is not to do that and take advantahe of 0 G or no Gravity.

4th of July in Bucharest

GB – I am very honoured to be here in Romania, it was a very pleasant experience and I enjoyed the opportunity to talk to Romanians, to visit Bucharest, feeling warm, feeling I was part of the World.

Q – What was the most interesting place to visit here in Bucharest?

GB – I enjoyed the 4th of July at the American Embassy.


Guion Bluford was the first african-american in a NASA mission in Space, in 1983. After the first flight, he returned in the outer Space for three times, in 1985, 1991 and 1992, in Challenger and Discovery missions. During his activity at NASA, he spent 688 hours in the Space in scientific missions. Before that, Bluford was a pilot in US Army, from 1966, and he is a retired colonel. 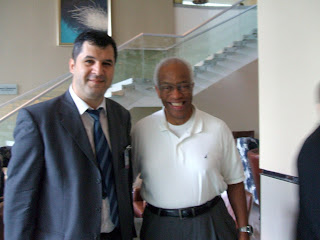