pe iunie 08, 2011
Ma uitam pe o postare de pe blogul Departamentului de Stat american si mi-a sarit in ochi un amanut din forografia de deschidere - steagul Romaniei.
Da, era chiar steagul Romaniei la un articol despre SIDA - Global HIV/AIDS: A Moment To Look Back, and To Move Ahead.
Autorul - Ambassador Eric Goosby serves as U.S. Global AIDS Coordinator.
In text, insa, nimic despre Romania.
This week, I am in New York for the UN High-Level Meeting on HIV/AIDS. This discussion will mark critical milestones, including three decades of the pandemic and the 10-year anniversary of the 2001 UN General Assembly Special Session on HIV/AIDS and the resulting Declaration of Commitment. The past decade has seen remarkable advances in the fight against AIDS in developing countries, with the United States playing a pivotal role through PEPFAR. As the largest donor by far to fighting global HIV/AIDS, the U.S. will use this landmark event to re-energize public support and political commitment for a continued, effective, and shared response to the global HIV/AIDS epidemic.

As a young physician in the 1980s in San Francisco, I found myself in the middle of the emerging epidemic in America. In those days before treatment, I worked with hundreds of young men and women, treating opportunistic infections and helping people live and die with dignity. During those long days, I was guided by inspiration, which fueled the hope. Hope for the providers so they could impart hope to those so desperately seeking our help. If I wasn't inspired to help, I couldn't wake up and do what I did every day.

This work on the front lines impacted my later efforts in the policy arena. I wanted to ensure that our government was responding to the needs of the people in my clinics and the clinics like mine across the United States. In the Clinton Administration, I served as one of the President's advisors on HIV/AIDS. As the first Director of the Ryan White Care Act at the U.S. Department of Health and Human Services, I helped develop HIV/AIDS delivery systems in the United States. It was in this arena that I started to focus on what we could achieve through a collective response in developing a continuum of services for the populations impacted by this disease.

It was during this time that we made enormous strides in treatment. The discovery of antiretroviral therapy revolutionized care in the United States, but also highlighted the disparities in access facing many low-income and marginalized populations. We developed the first clinical guidelines for treatment, which played and continue to play a key role in facilitating scale-up of programs, particularly in non-specialty settings that improved access. A 'warmline' phone system was set up to field calls from providers with questions about managing therapy. We also conceived of and implemented with the Congressional Black Caucus, the Minority AIDS Initiative, focused on bringing federal resources to CBOs well interfaced with minority populations, but not familiar with administrative requirements to receive federal funding. Together, these steps helped Ryan White and other federal programs respond to the need and helped to expand access to not only treatment, but the supportive services needed to help with identification and retention in care, and impacted overall health.

After serving in the Clinton Administration, I turned my focus from the domestic epidemic to the global HIV/AIDS emergency, founding the Pangaea Global AIDS Foundation in 2001 and returning to UCSF Medical School. It was devastating to travel to countries in Africa and see, once again as we were once saw in the United States, people who treatment had not yet reached. Hospitals were packed with patients -- two or three people sharing beds, and even more lining the corridors, all with undiagnosed and untreated opportunistic infections. Doctors and nurses were overwhelmed and had no hope. Families and communities were decimated, and governments had few options to address this overwhelming need.

In 2003, President Bush, with the bipartisan support of Congress, responded to this overwhelming need with the creation of the U.S. President's Emergency Plan for AIDS Relief, or PEPFAR. PEPFAR is the largest international response to a single disease any country has undertaken in the history of the world, and an immense display of our country's compassion and commitment to human dignity. It has transformed the lives of millions living with HIV in the developing world. Since 2009, I have been honored to serve President Obama and Secretary Clinton as the United States Global AIDS Coordinator.

The program that I am privileged to run is extraordinary. In 2002, fewer than 50,000 people had access to treatment in sub-Saharan Africa. PEPFAR now supports treatment for over 3.2 million people, the vast majority of whom live in Africa. We support over 3.8 million orphans and vulnerable children, giving them a chance at education, nutrition and a better life. And in reaching over 600,000 mothers with services to prevent mother-to-child transmission of HIV, our program led to over 114,000 babies being born free of HIV in 2010 alone.

Moreover, the Obama Administration's commitment to ensuring that these numbers are increasing is unwavering. We are strongly focused on reaching our goal of treating more than four million people. It is achievable. And that's what counts -- what we are achieving together -- to extend lifesaving services to more and more people.

I look back at the progress that has been brought to the world by the American people over the last decade and I am inspired. Thirty years on the front lines hasn't hardened my ability to dream. But thirty years has sharpened my focus. Thanks to the support of the Obama Administration -- which has continued to put forth robust funding for HIV/AIDS -- and the bipartisan support from Congress, we are making remarkable achievements and we remain the major contributor to the resource needs this diseases continues to require. We understand that the global response to this disease will not be fully met by one country alone but only through an organized effort to mobilize and converge global resources. The goal now is to make sure everyone is sharing in the responsibility to take our aspirations and make them achievable to restore those lives devastated by this disease. In all of this, hope will remain the major motivator for further success.
---
Acum, nu ca sunt paranoic, dar prea s-au creat tipare cu romanii si SIDA, de parca romanii ar fi principalii responsabili de raspindirea bolii... 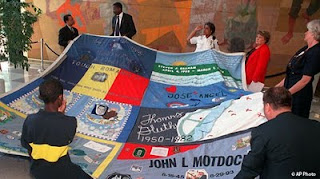