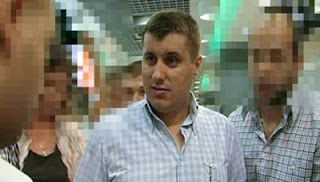 In a move that could heighten tensions in the latest tit-for-tat spy flap, Russia said on Wednesday it could retaliate to the expulsion of its diplomat from Bucharest.
Romania on Tuesday declared Anatoly Akopov, first secretary of the Russian Embassy in Bucharest, persona non grata after Moscow detained a Romanian Embassy official for alleged spying and ordered him out of the country.
"Unlike the first secretary of the Romanian Embassy in Moscow, who was caught red handed in possession of materials and spying equipment that completely exposed his illegal activities, the Russian diplomat was not involved in any activities that could provide grounds for such decisions," the Foreign Ministry said.
"We warned Bucharest against such actions, but it seems that common sense did not prevail."
"We reserve the right to take retaliatory measures," the ministry said.
On Monday, Russia's Federal Security Service (FSB) announced that Gabriel Grecu, first secretary of the political department of the Romanian Embassy in Moscow, had been detained in Moscow while trying to obtain military secrets from a Russian national.