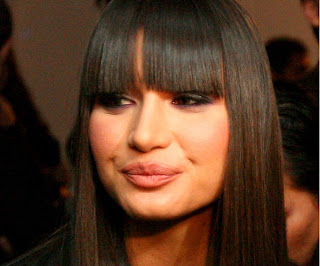 Romania president's flashy daughter seeks EU seat
By ALISON MUTLER – 1 day ago
BUCHAREST, Romania (AP) — Elena Basescu prances down the catwalk, goes clubbing until the wee hours and mangles her grammar.
So is she just what the European Parliament needs? She's running for a seat, though one critic has dismissed her as a Barbie doll.
Basescu's father happens to be Romanian President Traian Basescu. And Romanians are riveted by the daughter's dive into politics.
At 28, Elena Basescu is no typical politician. But with her bee-stung lips, waist-length hair and trendy clothes, she gets almost as much coverage as her father.
Not all the attention is favorable. Observers say she lacks experience and stumbles when she speaks. Her candidacy has been derided as a ploy to win votes for the Democratic Liberal Party, which her father used to run.
"She was proposed by people who wanted to suck up to Basescu," Vasile Matei, a history professor in the city of Dej, said Wednesday. "Romania can't fight for its interests with a Barbie doll."
Messages seeking comment from Elena Basescu were not returned.
Matei predicted her candidacy would be withdrawn. Others hope he's right: Alina Mungiu Pippidi, a sober intellectual, said she would not run for the European Parliament if Basescu was on the same slate.
"Save Elena Basescu!" ran a column in the Evenimentul Zilei daily newspaper Tuesday. "Elena Basescu needs a project, not a seat in Parliament."
Traian Ungureanu, a former BBC Romanian Service journalist, was kinder. But he praised Basescu not for what she was but for what she wasn't: She's not corrupt, he said, nor is she a protegee of Romanian oligarchs.
Nor is it certain that she makes all her own decisions. In December she broke up with her boyfriend, Andrei Hrebenciuc — the son of one of her father's rivals.
"I should have listened to my father," Basescu said. "He's always right."
She might be listening to him again soon. In an interview this week, the president failed to express support for her candidacy, saying instead he would speak to her about it.
"Whatever I say, it will be nicely," he said.
Copyright © 2009 The Associated Press. All rights reserved.
Basescu