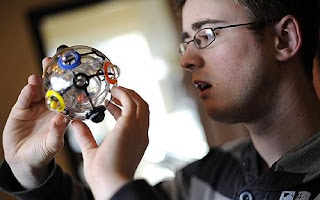 A new game by Professor Erno Rubik, inventor of the iconic Cube, is tipped to become a best-seller when it goes on sale later this year.The Rubik’s 360 is set to repeat the success of the maddening Cube, which became an overnight sensation almost three decades ago and remains the world’s fastest-selling toy.

The puzzle, shown to the Sunday Telegraph ahead of its unveiling at a toy industry fair in Germany on February 5, confronts users with the same frustrating challenge – a task that is simple to understand, with only one possible solution, yet extremely difficult to execute.

Players must get the coloured balls from an inner sphere into matching slots on the outer sphere by shaking them through a middle sphere that has only two holes.

The new puzzle is already arousing interest among Rubik’s Cube afficionados. Ron van Bruchem, 41, the Dutch co-founder of the World Cube Association, said: “Our community is very interested in the upcoming release of Rubik 360.”

Student Joel Gouly , 18, from Leeds, who can solve the Rubik’s Cube blindfolded in under one minute, said: “It looks like more of a physical game that requires dexterity whereas the Cube is something to ponder but there’s no reason it can’t catch on.

"It would be hard to beat the original Cube though.”

The Cube was an instant success when it was first exported from Communist Hungary in 1980, becoming the world’s fastest-selling toy and a must-have accessory in the school playground as well as the home.

More than 350 million have been sold worldwide and the Cube retains a cult following, with almost 40,000 entries on YouTube featuring tutorials and video clips of quick solutions.

Described by its creator as not so much a toy as “a work of art”, it earned a place as a permanent exhibit in New York’s Museum of Modern Art and entered the Oxford English Dictionary after just two years.

Since 1980 Professor Rubik has released other toys and games but none have become as famous as the Cube.

The 64-year-old sculptor, engineer and architect has not been interviewed for 10 years and rarely attends any of the worldwide 'speedcubing’ competitions organised by fans, but released a statement which said: “I feel that the 360 is one of the most innovative and exciting puzzles we’ve developed since the Cube – adopting elements of my original design, challenging the solver to use skill, dexterity and logic.”

David Hedley-Jones, vice-president of firm Seven Towns, which holds the British rights to Rubik games, believes the new puzzle “is going to be huge”.

He said: “We’re certain we have found a winner in the 360 and are confident that the fantastic new concept will have all the appeal and longevity of the Cube.

"It is suitable for all ages and abilities and, requiring no electricity or batteries, it’s very much in the current eco-friendly mode.”

As retailers feel the pinch from the recession, the toy industry believes simple games are well-placed to succeed.

In Britain, sales of the Cube have risen four-fold in two years as consumers return to simple classics, in a trend which has also boosted sales of Lego and Playmobil.

“People have gone back to safe brands that have been on the market for a while and that they have confidence in,” said Gary Grant, chairman of the Toy Retailers Association.

The Rubik’s 360 will go on sale in August and will be distributed in Britain by Drumond Park Games .
RUBIK’S CUBE FACTS

* It has only one solution

* The first international 'speedcubing’ championship was held in Hungary in 1982 and was won by Los Angeles student Minh Thai with a time of 22.95 seconds.

* The current British 'speedcubing’ champion is Breandan McElhill, 16, from Ayrshire with an unofficial personal best time of 7.9 seconds.

* The current world 'speedcubing’ champion is Dutch teenager Eric Akkersdijk with an official time of 7.08 seconds.

* Variations on 'speedcubing’ include solving the cube with a single hand, with feet, blindfolded or underwater in a single breath. The British blindfold 'speedcube’ champion is Joey Gouly, 17, from Leeds with a time of 48 seconds.

* The slowest solver is thought to be Graham Parker, 45, a builder from Portchester, Hants, who finished his Cube earlier this month 26 years after he bought it. “When I clicked that last bit into place and each face was a solid colour I wept,” he said.