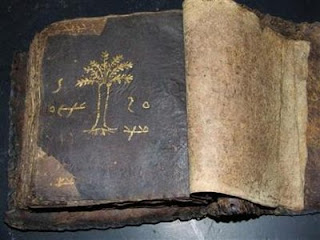 Authorities in northern Cyprus believe they have found an ancient version of the Bible written in Syriac, a dialect of the native language of Jesus.

The manuscript was found in a police raid on suspected antiquity smugglers. Turkish Cypriot police testified in a court hearing they believe the manuscript could be about 2,000 years old.

The manuscript carries excerpts of the Bible written in gold lettering on vellum and loosely strung together, photos provided to Reuters showed. One page carries a drawing of a tree, and another eight lines of Syriac script.

Experts were however divided over the provenance of the manuscript, and whether it was an original, which would render it priceless, or a fake.

Experts said the use of gold lettering on the manuscript was likely to date it later than 2,000 years.

"I'd suspect that it is most likely to be less than 1,000 years old," leading expert Peter Williams, Warden of Tyndale House, University of Cambridge told Reuters.

Turkish Cypriot authorities seized the relic last week and nine individuals are in custody pending further investigations. More individuals are being sought in connection with the find, they said