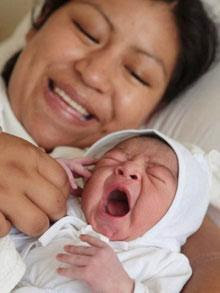 Virgin Maria Huarcaya, 20, delivered the 7.7 pound (3.5 kg) boy in the early hours of Christmas Day at the central maternity hospital in the capital Lima, according to Peru's state news agency. She then named him Jesus Emanuel. But in a further twist, the baby's father, Adolfo Jorge Huamani, 24, is a carpenter. Struck by the coincidence, Peruvians were quick to make Biblical comparisons. "Two thousand years later the story of Bethlehem is relived," read the headline about the birth in El Comercio, the leading newspaper in Peru, which is a predominantly Roman Catholic country. The boy's father said: "A few days ago we had decided to name my son after a professional soccer player. "But thanks to a happy coincidence this is how things ended up."