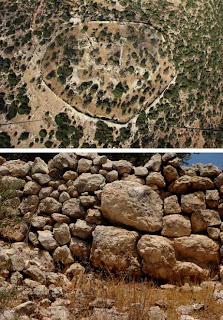 The remains of an ancient gate have pinpointed the location of the biblical city Sha'arayim, say archaeologists working in Israel.
In the Bible young David, a future king, is described as battling Goliath in the Elah Valley near Sha'arayim.
The fortified gate at the Elah Fortress—the second to be found at the site—proves the existence of Sha'arayim, which means "two gates" in Hebrew, said Hebrew University archaeologist Yosef Garfinkel.
"All the sites from this period uncovered so far had only one gate. We have two gates and this is very unusual," Garfinkel said.
The gate, constructed of stones weighing up to ten tons, is located on the site's eastern side, facing Jerusalem.

The discovery is the second recent find to be made at the Elah Fortress—known as Khirbet Qeiyafa in Arabic—which is located near the present-day Israeli city of Bet Shemesh.
In October, Garfinkel revealed a 3,000-year-old pottery shard with text believed to be Hebrew—then hailed as the most important archaeological discovery in Israel since the Dead Sea Scrolls.
Initial carbon-14 dating of olive pits found at the site, as well as analysis of pottery remains, placed the text to between 1000 and 975 B.C.—the time King David would have lived.
Garfinkel believes the discovery provides further evidence that the fortified city or outpost was part of a centralized governmental system administered by King David, head of the Kingdom of Israel.
The fortress is the first site found from the Iron Age in what was once territory controlled by King David.
Sha'arayim is also mentioned three times in the Bible and is twice linked to David.
"Everything comes together—the geography, the Bible, and the radiometric dating. It's no coincidence," Garfinkel said.

Other archaeologists received news of the second gate's discovery with interest, but they warned of jumping to conclusions.
Amos Kloner, an Israel studies professor at Bar Ilan University, once served as district archaeologist around the Elah site but is not involved in the current excavations.
"This is an initial idea, all aspects of which must be examined," he said. "[But] it doesn't matter if there is a second gate … This provides no indication of a Judean population there."
It's not known whether the Judeans or the Philistines controlled the strategic fortress overlooking the Elah Valley.
Team leader Garfinkel believes the site was most likely the westernmost outpost maintained by the Kingdom of Judea, which controlled land in southwest Asia and Palestine and was a predecessor to the Kingdom of Israel.

Israel Knohl, also not involved in the Elah excavations, is a Biblical studies expert at Hebrew University of Jerusalem.
"The main problem with this site is that we still need unequivocal proof that it was a city of Judeans," Knohl said.
The discovery of the second gate "is of secondary importance … At the moment, we cannot determine with certainty this was Sha'arayim or that it was a Judean city."
Scholars know almost nothing of life in Sha'arayim.
"If you ask me what life was like even in Jerusalem during the time of King David, that we can't say," Knohl said. "When it comes to smaller [and less important] locations, we simply don't know."
Garfinkel said he will continue to explore the Elah site in search of further evidence.
"Maybe we'll find an inscription on the gate indicating who built the city: 'I David, son of Yishai, built this city,'" he said with a laugh.