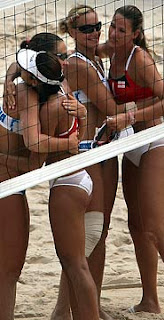 A truce may have been called in South Ossetia - but tell that to Russia and Georgia’s women’s beach volleyball players.

Hours after their countries had declared an uneasy ceasefire in the disputed border region, the two sides extended hostilities dressed only in bikinis in a hot and humid Olympic arena.

In this case, it was Russia which was overpowered by superior firepower and Georgia that strode forward as victors.

Or was that Brazil? Yes, if you listened to the Russians as they grumpily licked their wounds in defeat. For it turns out that the Georgians were not really Georgians at all, but talent imported from the beaches of Rio de Janeiro.
Olimpiada