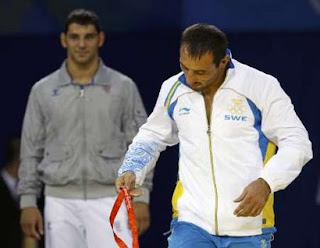 BEIJING, Aug 14 (Reuters) - Swedish wrestler Ara Abrahamian threw down his greco-roman bronze medal in protest on Thursday after his bid for Olympic gold was ended by a decision denounced by the Swedish coach as “politics.”

Abrahamian took the bronze from around his neck during the medal ceremony, stepped from the podium and dropped it in the middle of the wrestling mat then walked off.

“I don’t care about this medal. I wanted gold,” he said.

A bitter Abrahamian, silver medalist at Athens 2004 who had high hopes of top honors in the 84kg competition in Beijing, announced he was quitting the sport.

“This will be my last match. I wanted to take gold, so I consider this Olympics a failure,” he said.

The Swedish wrestler had to be restrained by teammates earlier when a row erupted with judges over the decision in a semifinal bout at the Chinese Agricultural University Gym with Andrea Minguzzi of Italy, who went on the take gold.

Abrahamian shouted at the referee and judges then went over to their seats to speak to them up close. He angrily threw off the restraining arm of a team official then turned and left.
Swedish fans booed loudly as the judges filed out of the arena. Abrahamian said nothing to waiting reporters but whacked an aluminium barricade with his fist as he left the hall.

Abrahamian later said he believed his loss to the eventual gold medalist Minguzzi was “totally unjustified.” The wrestler said his friends “called me just 20 minutes before the (bronze) competition, begging me to compete.”

“I decided that I had come this far and didn’t want to let them down, so I wrestled,” he said.

Myllari did not say if he intended to lodge a formal protest over the decision by referee Jean-Marc Petoud of Switzerland, judge Lee Ronald Mackay of Canada, and mat chairman Guillermo Orestes Molina of Cuba.

Other favourites went out in the semi-finals or earlier.

Athens 96kg gold medallist Karam Gaber of Egypt failed to make it to the quarterfinals. Aleksey Mishin of Russia, who took Athens gold in the 84kg class, was beaten by Minguzzi. Ramaz Nozazde of Georgia, who took silver in Athens, succumbed to Marek Svec of the Czech Republic, still fighting at age 35. Svec then lost to Russia’s European champion Aslanbek Kushtov, who caught him with a spectacular fall.

In the heavyweight 120kg class, Armenia’s Yuri Patrikeev and Dremiel Byers of the United States, both favored as finalists, failed to go through.

By STEPHEN WILSON, AP Sports Writer
BEIJING (AP)—A Swedish wrestler was disqualified and stripped of his bronze medal Saturday for dropping the prize in protest after a disputed loss at the Beijing Olympics.

Ara Abrahamian was punished by the International Olympic Committee for violating the spirit of fair play during the medal ceremony, becoming the fourth athlete kicked out of the games and bringing the number of medals removed to three.
Olimpiada