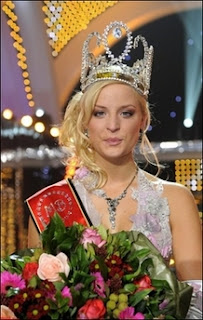 Belgium's political tensions entered the glamour stakes after it was revealed that the new Miss Belgium does not speak Dutch.

Alizee Poulicek, who comes from the country's French-speaking region, was booed by some of the 4,000 audience when she admitted that she could not understand a question put to her in Dutch at the contest on Saturday night in the main Flemish city of Antwerp.

The paper underlined that the "community crisis in our country" -- where there is no government six months after general elections amid bickering between leaders of the main French and Flemish parties -- "has insinuated itself into even the lightest sector."

Poulicek's victory "is not going down well," the daily said.

She said she had been taking Dutch lessons before the contest and has pledged to improve her standard in one of Belgium's three official languages, along with French and German.

The incident did not hurt her image with television viewers who voted for her, but Flemish journalists assailed her with questions at a press conference, highlighting her deficiencies in their tongue.

The Flemish community accounts for 60 percent of Belgium's 10.5 million people. A further 3.5 million live in Wallonia and one million in the largely Francophone, but officially bilingual Brussels.
COMMENT. O CHEAMA PULI, IN ROMANA, SI CHECK, IN ENGLISH...