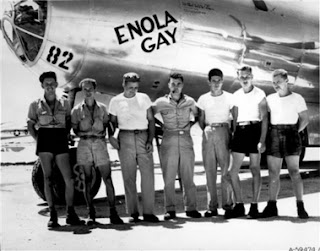 Paul Tibbets, who piloted the B-29 bomber Enola Gay that dropped the atomic bomb on Hiroshima, died Thursday. He was 92 and insisted for six decades after the war that he had no regrets about the mission and slept just fine at night.

Tibbets died at his Columbus home. He suffered from a variety of health problems and had been in decline for two months.

Tibbets had requested no funeral and no headstone, fearing it would provide his detractors with a place to protest, said Gerry Newhouse, a longtime friend.

Tibbets' historic mission in the plane named for his mother marked the beginning of the end of World War II and eliminated the need for what military planners feared would have been an extraordinarily bloody invasion of Japan. It was the first use of a nuclear weapon in wartime.

Three days later, the United States dropped a second nuclear bomb on Nagasaki, Japan, killing an estimated 40,000 people. Tibbets did not fly in that mission. The Japanese surrendered a few days later, ending the war.

"I knew when I got the assignment it was going to be an emotional thing," Tibbets told The Columbus Dispatch for a story published on the 60th anniversary of the bombing. "We had feelings, but we had to put them in the background. We knew it was going to kill people right and left. But my one driving interest was to do the best job I could so that we could end the killing as quickly as possible."

Morris Jeppson, the officer who armed the bomb during the Hiroshima flight, said Tibbets was energetic, well-respected and "hard-nosed."

"Ending the war saved a lot of U.S. armed forces and Japanese civilians and military," Jeppson said. "History has shown there was no need to criticize him."

Tibbets, then a 30-year-old colonel, never expressed regret over his role. He said it was his patriotic duty and the right thing to do.

"You've got to take stock and assess the situation at that time. We were at war. ... You use anything at your disposal."

He added: "I sleep clearly every night."

Tibbets took quiet pride in the job he had done, said journalist Bob Greene, who wrote the Tibbets biography, "Duty: A Father, His Son, and the Man Who Won the War."

"He said, 'What they needed was someone who could do this and not flinch — and that was me,'" Greene said.

He was a student at the University of Cincinnati's medical school when he decided to withdraw in 1937 to enlist in the Army Air Corps.

After the war, Tibbets said in 2005, he was dogged by rumors claiming he was in prison or had committed suicide.

"They said I was crazy, said I was a drunkard, in and out of institutions," he said. "At the time, I was running the National Crisis Center at the Pentagon."

Tibbets retired from the Air Force as a brigadier general in 1966. He later moved to Columbus, where he ran an air taxi service until he retired in 1985.

The National Aviation Hall of Fame in Dayton plans a photographic tribute to Tibbets, who was inducted in 1996.

"There are few in the history of mankind that have been called to figuratively carry as much weight on their shoulders as Paul Tibbets," director Ron Kaplan said in a statement. "Even fewer were able to do so with a sense of honor and duty to their countrymen as did Paul."

Tibbets' role in the bombing brought him fame — and infamy — throughout his life.

In 1976, he was criticized for re-enacting the bombing during an appearance at a Harlingen, Texas, air show. As he flew a B-29 Superfortress over the show, a bomb set off on the runway below created a mushroom cloud.

He said the display "was not intended to insult anybody," but the Japanese were outraged. The U.S. government later issued a formal apology.

Tibbets again defended the bombing in 1995, when an outcry erupted over a planned 50th anniversary exhibit of the Enola Gay at the Smithsonian Institution.

The museum had planned to mount an exhibit that would have examined the context of the bombing, including the discussion within the Truman administration of whether to use the bomb, the rejection of a demonstration bombing and the selection of the target.

Veterans groups objected, saying the proposed display paid too much attention to Japan's suffering and too little to Japan's brutality during and before World War II, and that it underestimated the number of Americans who would have perished in an invasion.

They said the bombing of Japan was an unmitigated blessing for the United States and the exhibit should say so.

Tibbets denounced it as "a damn big insult."

The museum changed its plan and agreed to display the fuselage of the Enola Gay without commentary, context or analysis.

He told the Dispatch in 2005 that he wanted his ashes scattered over the English Channel, where he loved to fly during the war.

Newhouse confirmed that Tibbets wanted to be cremated, but he said relatives had not yet determined how he would be laid to rest.

Tibbets is survived by his wife, Andrea, and three sons — Paul, Gene and James — as well as a number of grandchildren and great-grandchildren. A grandson named after Tibbets followed his grandfather into the military as a B-2 bomber pilot currently stationed in Belgium.