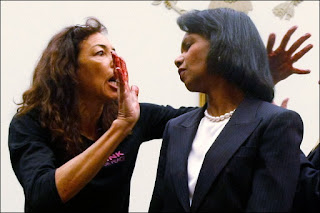 A woman with her hands painted blood-red confronted Secretary of State Condoleezza Rice at the US Congress Wednesday, shouting "war criminal" before being hauled away by Capitol security.

Desiree Farooz accosted Rice ahead of her appearance at a House of Representatives hearing on US foreign policy, waving her hands just centimeters (inches) from the diplomat's face inside the committee meeting room as television cameras captured the confrontation.

"The blood of millions of Iraqis is on your hands," Farooz shouted, before police wrestled her away.

Several other people, members of the anti-war activist group Code Pink, were subsequently ejected from the room.