Cheney and Obama are distant cousins 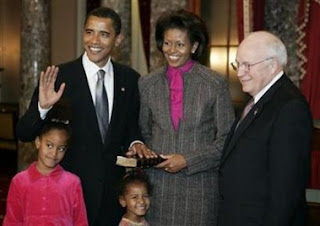 So says the vice president's wife, Lynne Cheney, who said she discovered that her husband of 43 years is eighth cousins with the senator from Illinois.

The two men could hardly be more different. Cheney is an advocate for pursuing the war in Iraq to try to stabilize the country, while Obama wants to get U.S. troops out of Iraq.

Mrs. Cheney told MSNBC on Tuesday that it was "an amazing American story that one ancestor ... could be responsible down the family line for lives that have taken such different and varied paths."

The common ancestor was Mareen Devall, who the Chicago Sun-Times said was a 17th century immigrant from France.