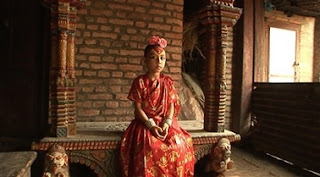 A 10-year-old Nepalese girl was stripped of her title as a living goddess because she traveled overseas to promote a documentary about the centuries-old tradition, an official said Tuesday.
Sajani Shakya had her status revoked because she broke with tradition by leaving the country, said Jaiprasad Regmi, chief of the government trust that manages the affairs of the living goddesses.

Sajani is among several "Kumaris," or living goddesses, in Nepal, and as one of the kingdom's top three, is forbidden from leaving the country. However, last month she went to the United States and other countries to promote a British documentary about the living goddesses of the Katmandu Valley. She is to return to Nepal this week.

"We have begun the process to search for a new Kumari," said Regmi, adding that a task force would determine suitable candidates.

Ishbel Whitaker, director of the film "Living Goddess" said she was shocked and saddened by this news and would make sure the girl's education was provided for. "The rule of not being able to leave was never a rule before.... Nobody ever said the Kumari can't travel" she said by telephone from London.

Whitaker said they filmed in Bhaktapur for a year. "We had been speaking with people we felt were authorities, and now these others are claiming they are," she said.

The film crew consulted anthropologists, the head priests of Sajani's temple and her parents, the director said. And she said the Nepalese Embassy helped arrange Sajani's trip to the U.S.

Living goddesses are worshipped by both Hindus and Buddhists. The girls are selected between the ages of 2 and 4 after going through several tests.

They are required to have perfect skin, hair, eyes and teeth, they shouldn't have scars or wounds, and shouldn't be afraid of the dark. They always wear red, pin up their hair in topknots and a "third eye" is painted on their forehead.

Devotees touch the girls' feet with their foreheads, the highest sign of respect among Hindus in Nepal.

During religious festivals the girls are wheeled around on a chariot pulled by devotees. Living goddesses usually keep their title until their first menstruation.

The main Kumari lives a sequestered life in a palatial temple in the capital, Katmandu. She has a few selected playmates and is allowed outside only a few times a year for festivals.

Others like Sajani are allowed to stay at home, attend regular school and take part in festivals.

The government last year announced a monthly pension of $40 for serving and retired Kumaris. Previously, the main Kumari received only a gold coin during an annual festival and the other girls received whatever was offered by devotees.

Nepalese folklore holds that men who marry a former Kumari will die young, and so many girls remain unmarried and face a life of hardship.

Critics have said the tradition violates both international and Nepalese laws on child rights. But the film director said the Kumari tradition can be modern as well.

"Sajani seemed to be a great example of how the tradition can move into the modern age," Whitaker said. She said she made the film because the living goddess tradition is beautiful and worth capturing before it disappears.