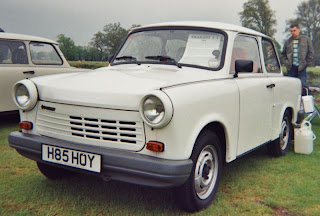 As a symbol of a bygone political era, the cheap and cheerful Trabant car means different things to different Germans, depending on whether they hail from the west or former communist East Germany.

West Germans tend to think at once of the countless jokes made about the lacklustre little runabout with its fume-belching, two- stroke engine. Those from the east however, may recall a carefree childhood trip to a Baltic beach long before the heavily-fortified border between the two countries was torn down in . http://www.blogger.com/img/gl.link.gif