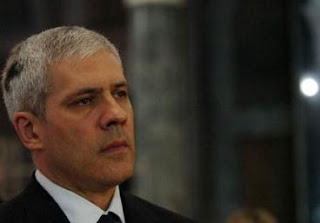 ZAGREB -- President Boris Tadić has apologized Saturday to citizens of Croatia for crimes committed in the 1990s war in that country. "I extend my apologies to all the citizens of Croatia who suffered because of what the members of my nation have done, for which I take responsibility," Tadić said in an interview with the Croatian state television (HRT).

Tadić is the first Serbian leader who has made an official apology to Croatia for crimes committed in the 1991-1992 war.

Tadić also noted that actions of former Bosnian Serb general Ratko Mladić represented one of “the darkest pages in the Serbian history.”
===
sa fie "next target"?