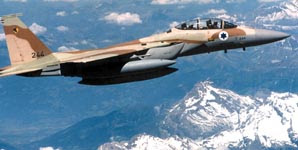 The Israeli Air Force (IAF) has been training on long-range flights, including refueling in mid-flight, in preparation for potential strikes against Iranian nuclear targets.http://www.blogger.com/img/gl.link.gif

The training program has been taking place for some time but has only been released for publication Friday, the Ma'ariv daily reported.

Intelligence assessments received by the defense establishment concur that once Iran passes the point of no return in its nuclear efforts, the entire Middle East will enter a frantic nuclear armament race. Egypt and Saudi Arabia are expected to lead such an armament race. TOT AICI