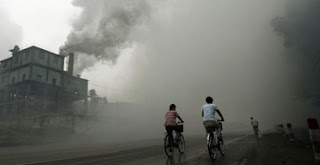 The surprising announcement will increase anxiety about China's growing role in driving man-made global warming and will pile pressure onto world politicians to agree a new global agreement on climate change that includes the booming Chinese economy. China's emissions had not been expected to overtake those from the US, formerly the world's biggest polluter, for several years, although some reports predicted it could happen as early as next year.
Articol in The Guardian