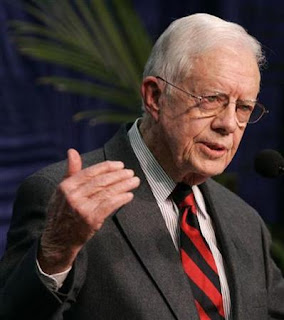 CRAWFORD, Texas (Reuters) - The White House on Sunday fired back at former President Jimmy Carter, calling him "increasingly irrelevant" a day after Carter described George W. Bush's presidency as the worst in history in international relations.

Carter, a Democrat, said on Saturday in an interview with the Arkansas Democrat-Gazette that "as far as the adverse impact on the nation around the world, this administration has been the worst in history."

White House spokesman Tony Fratto had declined to react on Saturday but on Sunday fired back.

"I think it's sad that President Carter's reckless personal criticism is out there," Fratto told reporters. "I think it's unfortunate. And I think he is proving to be increasingly irrelevant with these kinds of comments."

Carter has been an outspoken critic of Bush, but the White House has largely refrained from attacking him in return. Sunday's sharp response marks a departure from the deference that sitting presidents traditionally have shown their predecessors.

In the newspaper interview, Carter said Bush had taken a "radical departure from all previous administration policies" with the Iraq war.

"We now have endorsed the concept of pre-emptive war where we go to war with another nation militarily, even though our own security is not directly threatened, if we want to change the regime there or if we fear that some time in the future our security might be endangered," Carter said.

"I think that the almost undeviating support by Great Britain for the ill-advised policies of President Bush in Iraq have been a major tragedy for the world," Carter said.

Carter, who was president from 1977-1981 and won the 2002 Nobel Peace Prize for his charitable work, was an outspoken opponent of the invasion of Iraq before it was launched in 2003.